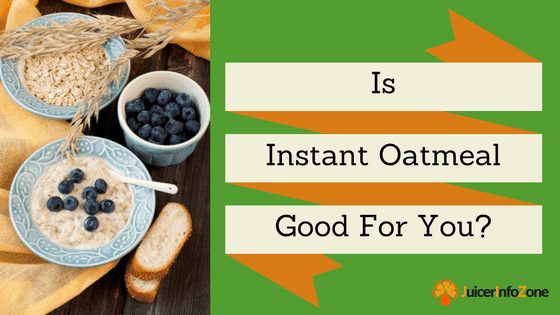 Given the choice between eating no oatmeal, and eating instant oatmeal, I would say the instant oats are still a good breakfast choice (with some caveats.) Maybe not ideal, but eating healthy is a matter of degrees.

I mention these two benefits because when you compare instant oatmeal to things like slower-cooking rolled oats because the way the oat is processed does have some impact on how the body digests them. This can effect the second benefit — slower digestion — but generally doesn’t negatively impact the first, cholesterol-lowering benefit.

But before we get into that, let’s understand exactly what instant oatmeal is and compare its nutritional values versus old fashioned oatmeal (rolled oats.)

What Is Instant Oatmeal? Instant oatmeal is simply thinly rolled oats which are then cut into very small pieces and pre-cooked by steaming.

The oatmeal is then typically “enhanced” with natural or unnatural flavorings, salt, sugar, and in some cases, preservatives. It’s then stuck in little 1 oz serving packets for convenience. This is the Maple and Brown sugar stuff you find in the box in the cereal isle.

Most instant oatmeal also comes in a “regular” flavor, which doesn’t have all the sugar and preservatives added, although it will often contain some added salt. For the sake of your question, we’re going to look at the regular, unsweetened variety. If we compared the flavored stuff, the old fashioned oats would win hands down.

The advantage of instant oatmeal over other forms of oatmeal like old fashioned oatmeal or oat groats, is cooking time. Thick cut or old fashioned rolled oats will typically take about ten minutes to cook on the stove top (less in the microwave); quick oats take about two minutes, and instant oats … well, you just add hot water and you’re all set.

Some people obviously also enjoy the added sugar and flavor in things like Raisin and Brown Sugar instant oatmeal, but the flavored varieties are where you start running into the nutritional problems — especially around sugar and sodium — so stay away from them.

What Is The Nutritional Value of Instant Oatmeal?

Surprisingly, if you go with the natural, unsweetened and unflavored variety of instant oatmeal, the basic nutritional values of instant oats are not all that different from slower cooking old fashioned oatmeal.

Here’s what a 1 oz packet of Quaker Instant Oatmeal (regular flavor with no added sugar) looks like:

Now, let’s look at a 1 oz dry serving of Quaker Old Fashioned Oatmeal (the stuff that takes 10 minutes to cook):

Surprise! Aside from the higher sodium content, the regular Quaker Instant Oatmeal actually has a marginally better macro-nutrient profile.

Well, the Quaker Oatmeal has the addition of oat flour added to the packets, which increases the fiber and protein content slightly. The higher calcium content is due to the addition of calcium carbonate to the mixture. Quaker also fortifies the instant oatmeal with a number of vitamins as well.

Now, you can get into philosophical and nutritional debates around whether these added vitamins and ingredients are good or bad, but from a basic nutrition perspective, instant oatmeal has gotten an undeserved, bad rap. It’s actually just as nutritious as old fashioned rolled oats.

But Instant Oatmeal Is Pre-Cooked! Isn’t That Bad?

Food purists often criticize instant oatmeal because it’s “pre-cooked.” The argument is that this pre-cooking reduces the natural nutritional values of the oat compared to thick cut rolled oats or oat groats.

But here’s a little secret:

Unless you are eating raw oat groats straight from the field, almost all oat products, including steel cut oats, thick rolled oats and Old Fashioned oatmeal are “pre-cooked” to some degree through the standard steaming process that’s done during milling. If they didn’t do this, it could literally take an hour to fully cook the raw oat.

Even raw oat bran is only marginally more nutrition ounce-for-ounce when you look strictly at the macros.

Now, could there be benefits to eating a less processed or uncooked form of oats, especially in terms of heat-sensitive vitamins? Perhaps. But when you compare instant oatmeal to old fashioned oats using the standard macros, they are pretty much equal.

One of the ways this is measured is by looking at the glycemic load of a food, which measures how a particular food impacts blood sugar and insulin. The higher the glycemic load (GL) number, the more impact a food has on insulin release.

So even here, while the instant variety of oatmeal does have more impact on blood sugar levels, it’s not nearly as dramatic as people often think — especially compared to other whole food sources of complex carbs that are consumed every day as part of a healthy diet.

It’s also important to remember the GL can be effected by the other foods you eat with the oatmeal, so if you are adding things like almonds, whey protein or whole fruit, the GL will typically decrease.

So Is Instant Oatmeal Good For You? The Verdict

You’ll still get the cholesterol-lower benefits of the soluble oat fiber — and while instant oatmeal does have a slightly higher glycemic load — it’s not nearly as bad as people think. So if the convenience of instant oatmeal helps you eat more of this healthy food, then go ahead and eat it.

In terms of sodium, even here, instant oatmeal isn’t terrible. There are other sources of food you probably eat daily with much more salt. So I wouldn’t over-focus on this unless you are on a sodium-controlled diet.

The Main Difference: Flavor and Texture

At the end of the day, the biggest difference between instant oatmeal and things like thick rolled oats or Scottish oats is the texture, flavor and how satisfying and filling they are.

Instant oatmeal is very mushy and its flavor can’t really compare to something like thick rolled oats. But many people like instant oatmeal just fine.

Also, oatmeal that takes longer to cook tends to absorb more water, and increases in volume much more than instant oats. Eating old fashioned or thick rolled oatmeal can help you feel fuller, for longer and makes the non-instant variety of oats more satisfying for many people. So that definitely can be an advantage.

If you want to have the convenience of instant oatmeal but with some of the flavor and texture benefits of a slower-cooking oatmeal, you can always prepare a large batch of oatmeal the night before and simply warm it up in a microwave the next morning. You will probably have to add some water or skim milk to it to make it creamier, but this is one way to get the time saving benefits of instant and the flavor benefits of slow-cooked oats.

Oatmeal prepared ahead of time can be stored in the refrigerator in a covered container for up to four days.

Kale is one of the greens, a healthy leafy vegetable, which holds numerous benefits. By using Kale in our dishes, we can incorporate beneficial effects into our daily lives. Some of the benefits of this green is being listed down here: It is such an amazing anti-cholesterol agent that it is able to lower cholesterol…

Jay Robb, the author of The Fruit Flush 3 Day Detox, yields a slightly higher mark of approval among some in the medical community in comparison to other “detox” diets. As a rule of thumb, any diet with the word “flush” or “detox” in the title will not be held in high esteem by anyone…

Many doctors and organizations around the world do believe today that there are Foods that can help cure diabetes and diabetics are advised to consume those kind of foods that can alleviate/reverse their condition for a better healthier life. Here is our pick for Foods That Can Help Cure Diabetes Avocado Avocados have a lot…

Why make time to eat breakfast? Because it makes good fitness sense. Research indicates that people who regularly eat breakfast may have less body fat and are less likely to overeat during the rest of the day. More importantly, when they lose weight, they tend to keep it off longer. Two studies in the Journal…